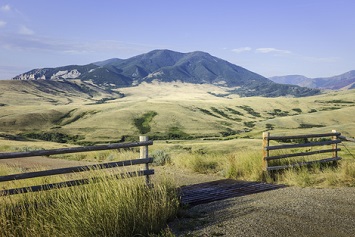 In Montana v. United States (1981), the U.S. Supreme Court found that Indian tribes do not have civil or criminal jurisdiction over nontribal members within a reservation. This opinion has proven to be one of the clearest indications that Indian tribes possess no authority over lands they do not own (called non-Indian fee lands), even if those lands are inside the boundaries of reservations. Montana has had the lasting effect of limiting the doctrine of the sovereignty of Indian tribes. However, in its opinion, the Supreme Court clarified that there were two exceptions—called the “Montana exceptions”—to this limitation on Indian authority. The Montana exceptions were central to a case regarding the authority of the Shoshone-Bannock tribes to collect permit fees from a company storing hazardous waste at the Eastern Michaud Flats Superfund site inside the tribes’ reservation near Pocatello, Idaho. The ruling by a panel of the U.S. Court of Appeals for the 9th Circuit should be understood by any non-Indian entity operating inside an Indian reservation.

For over 50 years, FMC Corporation operated an elemental phosphorus plant on fee land within the reservation. The operations produced approximately 22 million tons of radioactive, carcinogenic, and poisonous hazardous waste currently stored on the FMC property. The EPA declared the disposal area a Superfund site in 1990. In 1997, the EPA charged FMC with violating the Resource Conservation and Recovery Act (RCRA). A Consent Decree settling the RCRA suit required FMC to obtain permits from the tribes.

FMC and the tribes negotiated an agreement under which FMC would pay $1.5 million per year for a tribal use permit allowing storage of the hazardous waste. FMC paid the annual fee from 1998 to 2001 but refused to pay in 2002 after ceasing active plant operations. The tribes sued and won in tribal court. FMC then sued the tribes in a U.S. district court and lost; the district court did, however, find that the tribal court’s judgment was only partially enforceable. Both parties appealed to the 9th Circuit, which ruled in the tribes’ favor based on the Montana exceptions.

This exception provides that tribes have jurisdiction to “regulate, through taxation, licensing, or other means, the activities of nonmembers who enter consensual relationships with the tribe or its members.”

FMC entered a consensual relationship with the tribes through the permit agreement. But FMC argued that this relationship was coerced because the EPA required FMC to obtain relevant permits from the tribes to obtain a consent decree to settle the EPA’s RCRA-based claims. The 9th Circuit panel saw it differently.

“FMC may indeed have been ‘coerced’ in the sense that the EPA required it to obtain tribal permits as a condition for obtaining a consent decree,” stated the panel. “However, the ‘coercion,’ if it can be called that, came from FMC’s strong interest in obtaining a Consent Decree that would allow it to settle the RCRA suit on favorable terms.”

The panel agreed with the district court, which stated, “This was a simple business deal.… It was ‘not the product of illegal duress or coercion.’”

Under the second exception, the tribes had to demonstrate that FMC’s conduct on its fee lands threatens or has some direct effect on the political integrity, economic security, or health or welfare of the tribes. In the district court, the tribes produced expert witnesses who described the toxic nature of elemental phosphorus, as well as the potential for phosphine gas generated at the site to spontaneously burst into flames upon contact with air and explode at concentrations at or near 20,000 parts per million.

FMC argued first that the hazardous waste is contained and actively monitored by FMC and the EPA and poses little danger to the tribes. Reviewing the witness testimony, the panel disagreed and concluded that FMC’s storage of millions of tons of hazardous waste on the reservation does indeed threaten or have “some direct effect on the political integrity, economic security, or the health or welfare” of the tribes to the extent that it “imperil[s] the subsistence or welfare” of the tribes.

The court stated that this case was “light-years away” from the FMC case.

“In stark contrast to Evans, the threats from the FMC site…are not minimal annoyances. They are the threat of catastrophic health reactions, including death.”

In addition to overturning the district court’s finding that the tribes did not have the authority to undertake enforcement under the second exception, the panel also dismissed a petition by FMC that the ruling of the tribal court should be invalidated because two of its judges were not impartial.