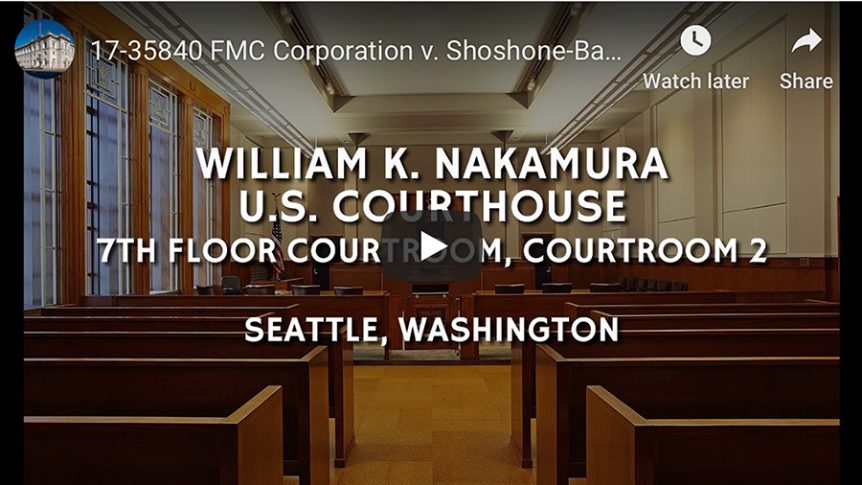 The attorney for the food and chemical conglomerate FMC Corporation told the 9th US Circuit Court of Appeals that it should no longer have to pay the Shoshone-Bannock Tribes an annual fee for storing hazardous waste on the reservation.FMC attorney Gregory G. Garre said that the tribe’s demand could be in perpetuity because the waste from a now closed phosphate processing plant is now a Superfund site and a safe cleanup could take decades. Or forever.

Phosphorus is toxic when ingested, inhaled or absorbed. It ignites when exposed to air. Most of the waste under the Superfund agreement was buried. The tribal appeals court said “tanker rail cars buried at the site contained ‘from 200 to 2,000 tons of elemental phosphorus sludge, 10–25% of which remained in each of the tankers at the time they were buried” because FMC concluded cleaning them was “dangerous” to Employees.”In other words the site was too dangerous to clean up. (A position that the EPA essentially agreed with in its handling of the Superfund cleanup.)

The site is near the Portneuf River and Fort Hall Bottoms where groundwater contamination threatens the “gathering and subsistence fishing, hunting and gathering by tribal members at the River, as well as the Tribes’ ability to use this important resource as it has been historically used for cultural activities.”

The three-judge panel for the federal appeals court agreed in a decision released Nov. 15, 2019, It said that the tribes have jurisdiction over the company. “We hold that the judgment of the Tribal Court of Appeals is enforceable under principles of comity.”

The court held that the tribal court had regulatory and adjudicatory jurisdiction over the Shoshone-Bannock Tribes’ suit against FMC under two “Montana exceptions” involving tribal authority over non-Indians. The appeals court said the tribe has inherent power when the actions of a company are a threat to the tribes economic security or the health and welfare of citizens.“

Today is a great day for the Shoshone-Bannock Tribes,” said Tribal Chairman Ladd Edmo in a news release. “We are very pleased with the 9th Circuit of Appeals ruling. I would like to commend our former Tribal leaders, our Land Use Policy Commissioners, technical staff and legal team for all the years of hard work.”

The tribes said that FMC must now pay the interest for past storage fees and an annual fee every year thereafter as long as the hazardous waste is stored within the reservation. The money under tribal law will be used for environmental monitoring, compliance, and cleanup.

The waste at FMC is toxic, reactive and presents a risk to our community. We are thankful the Ninth Circuit Court of Appeals recognizes this risk and recognizes our jurisdiction,” said the tribes’ environmental waste manager, Kelly Wright, in the news release. “ We can now work to fully implement our Hazardous Waste Main Act Regulations and develop safety monitoring and notification networks.”9th Circuit Court of Appeals DecisionFMC Corporation v. Shoshone-Bannock Tribes (November 15, 2019)

Mark Trahant is the editor of Indian Country Today. He is a member of the Shoshone-Bannock Tribes. Follow him on Twitter @TrahantReports.

This story originally appeared on Indian Country Today on November 18, 2019.