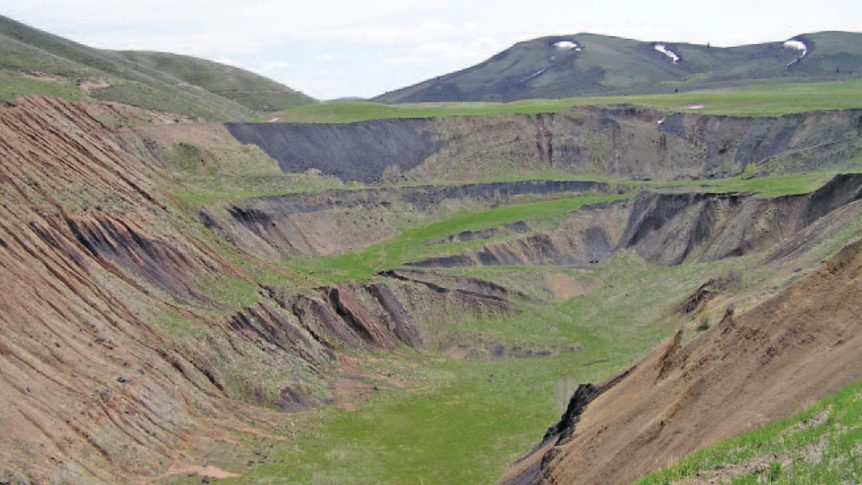 Twenty-two million tons of radioactive and carcinogenic hazardous waste were generated and stored on the Shoshone Bannock Reservation by the FMC Corporation’s (FMC) phosphorus plant operating there from 1949 to 2001. The U.S. Environmental Protection Agency (EPA) declared FMC’s plant and storage area a Superfund Site.

FMC was charged with violating the Resource Conservation and Recovery Act (RCRA) in 1997. A Consent Decree settled the RCRA suit, requiring FMC to obtain permits from the Shoshone-Bannock Tribes, pay the U.S. government a fine of $11.9 million, install upgrades to handle the hazardous waste, and cap nine of eleven RCRA ponds. FMC and the tribes agreed FMC would be granted a tribal use permit to store the hazardous waste for $1.5 million per year in perpetuity. FMC began paying the permit fees in 1998, but has refused to continue doing so in 2002 after it stopped plant operations in 2002.

The Shoshone-Bannock Tribes sued FMC in Tribal Court for the permit fees it refused to pay. In 2014, The Tribal Court of Appeals held the tribes had regulatory and adjudicatory jurisdiction over FMC under two exceptions of Montana v. United States, 450 U.S. 544, 101 S. Ct. 1245, 67 L. Ed. 2d 493 (1981). The first Montana exception is that a tribe may regulate through taxation or licensing, the activities of nonmembers who enter consensual relationships with the tribe or its members. The second exception is a tribe may “retain its inherent power to exercise civil authority over the conduct of non-Indians on fee lands within its reservation when that conduct threatens… the health or welfare of the tribe.” The court held FMC owed $19.5 million in unpaid use permit fees in hazardous waste storage.

In 2014, FMC fought the $19.5 million judgement by suing the Shoshone-Bannock Tribes in federal district court. FMC argued the Shoshone-Bannock Tribes did not have jurisdiction under either of the Montana exceptions, two judges on the Tribal Court of Appeals were biased against FMC, and the judgment by the Tribal Court of Appeals was unenforceable. The tribes counterclaimed and sought the judgment of the Tribal Court of Appeals be recognized and enforced. The federal district court rejected FMC’s due process challenge. However, the judges FMC accused of bias, Judges Gabourie and Pearson never made statements indicating bias against FMC. Both judges have emphasized the importance of impartiality. A reconstituted panel of judges considered the prior rulings of the Tribal Court of Appeals. The panel revised one aspect of the court’s prior decision and affirmed the others. A different reconstituted panel handled the rest of the proceedings, including the hearing of jurisdiction under Montana’s second exception. The district court enforced judgment under the first Montana exception, but not the second. It held the second exception lacked the sufficient nexus between the $1.5 million annual permit fee and the costs required to mitigate the threat from the storage of hazardous waste on the Reservation.

The U.S. District Court of Idaho held in favor of the Shoshone-Bannock Tribes to enforce a tribal court decision imposing permit fees on FMC Corp. Judge Winmill’s judgement included $19.5 million for unpaid permit fees from 2002 to 2014, plus an additional $1 million in attorney fees. Judge Winmill stated that FMC agreed to tribal jurisdiction and to pay $1.5 million annually in perpetuity to store the waste on the tribe’s reservation. He noted the waste “will persist for decades, generations even, and is so toxic that there is no safe method to move it off-site.” This fact is supported by the EPA that indicated it is “not technologically feasible to remove the toxic material and an attempt at such an undertaking would cost $4.7 billion.”

FMC next appealed the district court’s holding to the Ninth Circuit United States Court of Appeals. The Court of Appeals noted the general rule that “federal courts must recognize and enforce tribal court judgment under principles of comity.” However, it added that judgments are not recognized if the tribal court did not have personal and subject matter jurisdiction as well as a tribal court’s denial of due process to a losing party. The court used the Supreme Court’s framework in Montana to determine whether the tribes had regulatory jurisdiction to impose permit fees on FMC. The first Montana exception requires a consensual relationship with the tribes. FMC argued the consensual relationship with the tribes was forced because the EPA required FMC to obtain permits from the tribes to obtain a Consent Decree to settle EPA’s RCRA-based claims against it. The U.S. Court of Appeals, however, stated it failed to “see why a strong interest in obtaining a particular result is “coercion” that invalidates an agreement designed to achieve that desired result.”

To fulfill the requirements of Montana’s second exception, the nonmember’s activities must “imperil the subsistence or welfare” of the tribal community. The Court of Appeals concluded the second exception was satisfied based on factual findings from the EPA, expert testimony presented in the Tribal Court of Appeals, and the record as a whole. The court noted two sources of contamination that were cause of concern to the tribes: phosphorus-contaminated soil and phosphine gas. The contaminated soil will remain on the Ft. Hall Reservation indefinitely, posing a continued threat of health to the tribal community. RCRA ponds on the reservation created by FMC also continue generate phosphine gas that is “extremely toxic” to humans. The court added that the district court was mistaken in holding the tribes had jurisdiction under the Montana exception, while at the same time, holding the Tribal Court of Appeals’ judgment was not entitled to comity. It stated, “there must be some nexus between a basis for jurisdiction under Montanaand a tribal action in the exercise of that jurisdiction.”

On November 15, 2019, the U.S. Court of Appeals upheld the judgment the Shoshone-Bannock Tribal Court of Appeals was enforceable under both Montana exceptions. If you would like more information on this case or have tribal or environmentalconcerns, contact Whitcomb Selinsky PC.